Last Friday morning a group of third and fourth formers braved the rainy weather and did something – a vocational activity – that perhaps few would be ready to do during their Christmas holidays!

Some 25 thirteen and fourteen year olds met at the Malta International Airport, together with Vocations Director Fr Michael Bellizzi, and a handful of seminarians. They started off the day with a Mass celebrated in the Airport Chapel, animated by the seminarians themselves.

After Mass, they set off on a hike from Luqa to Birzebbugia, passing through the countryside, carefully avoiding the puddles and trying to find shelter from the occasional outpours of rain.

On arriving at the Birzebbugia school, the young people quickly downed their lunch to move on to games and a football match, which, as expected, became of course, the highlight of the day.

When asked which part of the day he mostly liked, one of the youths hesitantly replied, “The mass…no…the hike…no the football match…well actually everything”. Let us pray that young people continue to find guidance in discerning God’s call. 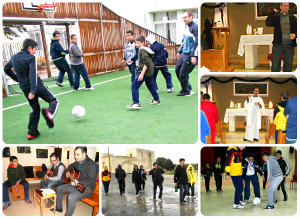