God’s mercy may be experienced through various ways and music is definitely one of them. It is for this reason that the Archbishop’s Seminary together with the St Paul Choral Society and the Divine Mercy Sanctuary are organising “Celebrating Mercy: the Jubilee of Mercy Concert”.

The proceeds of this concert will go to a fund which is being set up in order to finance the maintenance and the refurbishment of the Archbishop’s Seminary.

This concert which will be held on the 1st of April 2016 at the Divine Mercy Sanctuary, in San Pawl tat-Tarġa, will be given by the St Paul Choral Society under the direction of Dr Hugo Agius Muscat and will include soprano Rosabelle Bianchi and baritone Charles Buttigieg as soloists and Dr Elizabeth Conrad as organist. Drinks will follow at the venue.

The Repertoire – Celebrating Mercy: the Jubilee of Mercy Concert 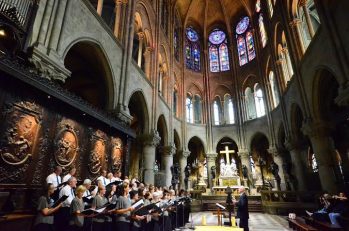 The St Paul Choral Society is one of Malta’s leading polyphonic choirs. Its repertoire ranges from the 16th century to the present day. Established in 1998, it has some 60 members who meet every Wednesday for practice in the under croft of St Paul’s Anglican Pro-Cathedral. It regularly performs at St John’s Co-Cathedral and to date it has performed in more than 200 singing events in the Maltese Islands and abroad.
In Advent every year since its inception, the SPCS has led the singing in the traditional Anglican service of Nine Lessons and Carols held at St Paul’s Anglican Pro-Cathedral and at Holy Trinity Church in Sliema. In 2008, as part of its tenth anniversary celebrations, it issued a highly successful CD of Christmas carols with the name O Gesù, Helwa Tarbija. In 2009 it took part in the Malta International Choir Festival and Competition, organised by the Interkultur Foundation and won a Silver Diploma (Level V).
In 2011 the choir went on a highly successful tour of London, singing at several prestigious venues including St Paul’s Cathedral and Westminster Cathedral. In 2013 the choir toured and sang in various cities in Austria giving concerts at the Votivkirche and St Stephen’s Cathedral in Vienna, at Melk Abbey, at the Kollegienkirche in Salzburg and at St James Cathedral, Innsbruck. In 2015 the choir gave enthusiastically received concerts in Paris at La Madeleine Church and at Saint Sulpice Church and also sang during Mass at the Cathedral of Notre Dame.

Dr Hugo Agius Muscat is a consultant public health physician with a passion for music. He started studies in organ performing in 1977. He obtained the Licentiate diploma of the Royal Schools of Music (LRSM) in organ performing in 1992 and the Certificate of the Royal College of Organists (CertRCO) in 2008. In 1983, he was appointed titular organist at St Paul’s Anglican Pro-Cathedral, Valletta, in 1984. He has played in major cathedrals and churches in cities across Europe, including Vienna, Salzburg, Innsbruck, Eisenstadt, Budapest, Tallinn, Stockholm, Paderborn, London, Warwick, Edinburgh, Dublin, Rome and Paris. He has accompanied many soloists and choirs in Malta and abroad, including the world-renowned tenor Joseph Calleja. In 1999 with Luciano Buono he edited the book Old Organs in Malta and Gozo. In 1998 he founded the St Paul Choral Society, and has been its Music Director since.

Dr Elisabeth Conrad is an organist, pianistand cellist with a strong reputation as a keyboard accompanist. In 2001, she was awarded the Licentiate Diploma of the Royal Schools of Music (LRSM) in organ performing, and also holds ATCL and ALCM diplomas in pianoforte performing and the ABRSM diploma in cello performing. She has been the St Paul Choral Society’s organist since 1999. For the past fifteen years she has regularly played on the organs at St John’s Co-Cathedral and St Paul’s Anglican Pro-Cathedral as soloist and accompanist to the SPCS in several concerts and services, and has accompanied the choir during concert tours in London, Austria and Paris. As a cellist, she has performed with several orchestras locally, as well as with the Mediterranean Youth Orchestra. Professionally, Dr Conrad lectures in environmental management at the Institute of Earth Systems of the University of Malta.