Yesterday evening, Sr Carmen Valentino RSCJ gave a talk to the Seminary community on the meaning and history of the image of Mater Admirabilis. This was done in preparation for the commemoration in honour of Mater – as it is affectionately referred to – to be held next Thursday at the Seminary.

Sr Carmen is a member of the Society of the Sacred Heart – a religious community which resides at the Seminary. The Society ran the Mater Admirabilis Training College at Tal-Virtú between the years 1954 and 1977 when the building started to function as a Seminary. Nevertheless, the sisters of the Sacred Heart remained a constant presence at the Seminary, fulfilling their charism of prayer and contemplation – especially by praying daily for each seminarian and for more vocations. 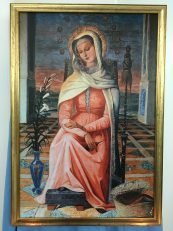 The portrait of Mater (Mother Most Admirable – Omm tal-Għaġeb or, better still, Omm ta’ min jammiraha) is very dear to the Society of the Sacred Heart. Sr Carmen pointed out that the portrait was painted by a young girl, Pauline Perdrau (who eventually joined the Society of the Sacred Heart) in 1844 – a crucial time for the Society. After some turbulent years, the image found a special place in the life of the Sisters of the Sacred Heart, so much so that the Training College at Tal-Virtù was dedicated to Mater Admirabilis. The nuns celebrated the name feast of the training College until it closed its doors in the early 1970s. However, the nuns managed to instil into the Seminary community the devotion to Mater Admirabilis and the feast in honour of Mater has been celebrated every year since then.

The portrait of Mater depicts Mary in a contemplative pose. Sr Carmen went on to say how Mary is shown to be in awe in front of the mystery of God. Albeit in the midst of working – as is depicted by the sewing needle in her hand, the book placed down upon the work basket, and the broom placed by her side – yet she is seen to be recollected in prayer and contemplation. Mary is thus a model for both nuns and seminarians as the one who constantly reflected on God’s goodness throughout her life.

After this reflection, the community prayed the rosary in front of the image of Mater followed by the celebration of Holy Mass.

A social activity was held afterwards to welcome Fr Albert Buhagiar, who is to take up the role of Rector in January, and Fr Mark Sultana who shall fulfill the role of Spiritual Director.